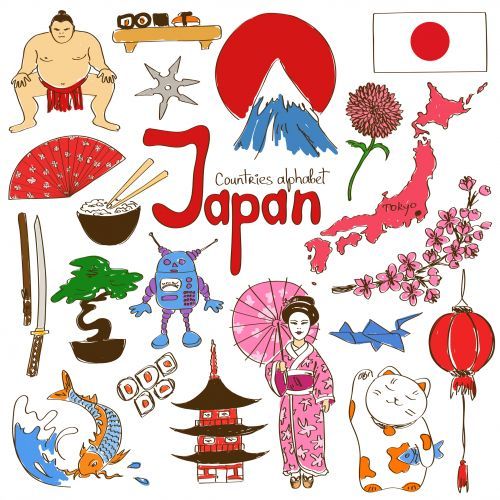 Recently, an economic journal stated, that the difficulties of the French with entering the Japanese market resulted from the lack of a savoir-vivre textbook, thanks to which they would find out about the nuances of Japanese politeness.

Professional life. The everyday life of a Japanese is work. Work weighs heavily on your private life, strictly separated from work and reduced to a minimum. Work relationships are not transferred to the home, to which stranger, mostly a foreigner, not allowed.

Companies and enterprises generally subscribe to clubs, where staff can talk to guests and relax. It is impolite to reject such an invitation, which extends the business meeting and transfers it to more favorable conditions. Usually they talk about cognac diluted with water (in Japan, where cognac consumption is the highest in the world, you drink it like whiskey). The hosts may be offended, if they are refused to participate in a lavish "wandering" around the premises, which lasts until late at night.

Negotiations take a lot of time and patience, because all employees involved are consulted at every level. Every word of the project or contract requires long debates. Do not show weariness or raise your voice, and a nervous person can only be called "fury o gaijin". Also, do not provide information for a specific person, use pressure, conduct conversations on the site. Everyone present should hear every word, and generally several people work in the same room. Once the decision is made, we can be sure, that it will be realized.

Eating together plays an extremely important role, especially if the audience is united by interests. Usually such meetings take place in good restaurants, extremely rare in private homes. The Japanese pride themselves on their cuisine for a reason. Neither cheese is served, nor desserts, and at dinner (it means, at the time of Polish dinner) it is not proper to drink alcohol. A party in a private house is prepared with great care and is performed with the entire ceremony.

Kindness. It is the Japanese art of living. It resembles a ceremonial and is very sophisticated. Thank you again and again for everything. The head and torso are bowed in greeting, rarely exchanges a handshake. The Japanese do not kiss in public. First, greet the eldest. The Japanese have great respect for the elderly. The last word always belongs to the elder. Young people are the first to speak during the negotiations, the elders close the discussion. European, who is already sure, that ended the case, she is amazed to find out, that the interlocutor has no right to conclude a contract without the consent and presence of the company's senior representative.

Unambiguous rejection of the proposal, saying "no", it is grossly unkind. The word "no" must be avoided, or even "yes", using more neutral phrases "soo des me" or "soo des ka". Don't go straight to the case, which brings us, you have to be able to wait, take a roundabout way to get to the heart of the problem. It is also not allowed to accept the offer too quickly. Compliments are a normal part of the discussion, and a smile should never disappear from your face, because it is behind him that all inner feelings are hidden. Japanese, who says goodbye to us, comes out backwards, because it is rude to turn your back on the person you are talking to.

Theft in Japan is virtually non-existent. If we leave the purse, briefcase or camera in a taxi, the driver will drive us back immediately. Tipping is unknown here, and wanting to leave them to someone, urazimy go. The Japanese, however, like and appreciate gifts. Handing them out is the order of the day.

Japanese women rarely take up employment, and their presence is most marked in the administration. Compared to men, they have little chance of promotion. They mostly take care of the house. By asking for them (even polite), one should exercise restraint.