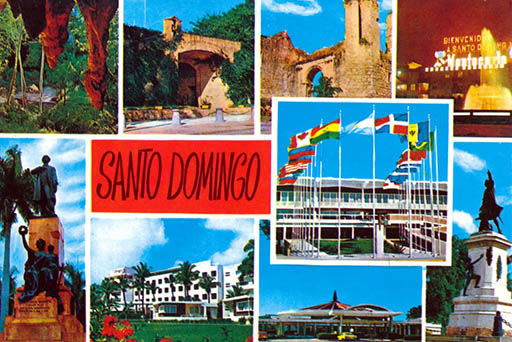 Samto Domingo is not the place, which most people coming to the Dominican Republic go to. Yes, those with a greater passion for sightseeing will leave the hotels of such tourist refuges as Punta Cana, Puerto Plata, Cabarete or Bavaro and they will come here for a day, to see the colonial district and maybe stroll down the seaside Malecon boulevard. However, the city has more to offer. What exactly? I will try to present it to you here.

Tell, that there is no one Santo Domingo, to wytarty truizm, true for any major city in South America or the Caribbean. So, poverty collides with wealth in all these cities. In Santo Domingo, however, this clash is really strong and… easily noticeable, for poverty did not pour out on the outskirts of the city. There is a lot of it near the center, or rather, the rich hid in big houses, in the hills outside the city. What can be said about the contrasts in the state, which reportedly sold more Ferraris per person, than any other? About the end, where the income per person is 8 400 USD, but 1/3 inhabitants live below the poverty line?

On the one hand, we come across the children of rich parents, who, disappointed, return from Madrid, discovering, that they can earn more on their island, and then tortured by the heat, standing in the highway dust, pitch black Haitians are trying to sell us cold drinks or ice cream, on which they earn after 15-20 pennies, per item sold. In few countries, the color of the skin so strongly determines the place on the social ladder. Dark-skinned people are even more disliked here, that the Dominican Republic has been occupied by Haiti in the past and has regained its independence with difficulty.

The city has a lovely colonial district. The first place, where we should look is Columbus Square, with an old cathedral and a nice square. It is a meeting place - everyone you meet, he will want to meet at the local Hard Rock Cafe (it's a bit like the Rotunda or the Sigismund's Column in Warsaw, Neptune in Gdańsk or St. Mary's Cathedral in Kraków).

It is also worth visiting the entire district, because it is very pretty and not too big. Other must-see points are Parque Duarte, Ozama fortress at the mouth of the river and Plaza De Espana. If we want to feel patriotic, we can go from poverty to Calle Las Damas - something like the Paris Pantheon or the Warsaw Belvedere. I will not write much, these are messages from each guide. The city has no beach, so if you want to fry a little in the sun, you have to go to e.g.. Boca Chica. Generally, we will find beaches here, used by all kinds of people, even local, or lower-class tourists. It is not Punta Cana and… we liked it. There are also great parties and some wild clubs in the city.

What not to say, for me, this place will always remain special. It was my first trip across the Atlantic and the first flight of such a long time. For the first time too, I experienced some great latin parties. I've never been to a fashion week party before and traveled around the country in a rental car. I was also there with two very close friends and a girlfriend, I was just starting a relationship with, but it was this city that we fell in love with. In short ... such a place is never forgotten.

PS I spent my favorite evening at an exclusive fashion week event there (end of October). An American invited us. We had fun, we shook, until finally the party started to dim. Turned out, that the VIP party has started, and other guests were being asked to leave. Of course, we launched an assault on the security guards with the guest list. The first attempt was a failure. In the second, we divided ourselves into groups, my buddies came in, and me with a girlfriend and a local Dominican woman not (moreover, by the fatal text about our presence on the list of the latter). However, we did not give up the third time, After we had fully complied with the security and the "admitting gentleman", we got inside. For us, a party like a party, quite exclusively, interesting people, swimming pool, good music… We just had a good time. But for our friend from the Dominican Republic ... She went all evening pointing at the guests and explaining to us who they are: “This is our Olympic champion!”, “This is the news presenter!”, “This is the actor of the most popular soap opera!”. You could say, that with our audacity we gave her an unforgettable evening.

The second time I had such an evening was in Sao Paulo.