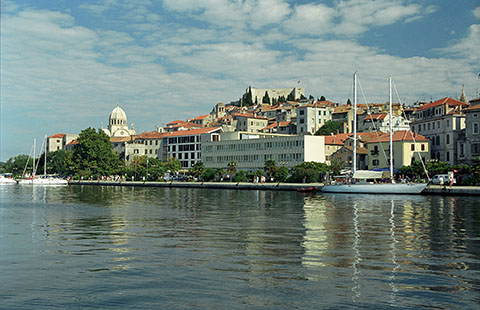 There are few places, where right after arriving, we say to ourselves "I could live here". For me, jednym z nich jest Sibenik (in Polish: Sibenik), beautiful Croatian town, flowing from the mountain slopes into the Adriatic Sea, located at the mouth of the river Krka.

Existing for a thousand years, considered the oldest city founded by Croats, owed their most beautiful buildings to Italy and Venice (Renaissance style reigns at its best, with a touch of gothic here and there), undiscovered yet and not spoiled by tourists (like Zadar, Split or Dubrovnik)… And beautiful. Today, approx. 50 thousands of people.

Already the greeting was lovely. Once we got off the bus, not having a place to stay, we were approached by an old gentleman, which, as soon as he heard, that I am Polish, he switched from broken English to perfect Polish. In addition, with a slight Warsaw accent. It turns out, that fifty years earlier, for half a decade he worked at the Yugoslav embassy, at Aleje Ujazdowskie.

He led us to his home and offered a room with kitchen and bathroom for rent. As an individual by nature, believing no one, who considers me a tourist, I persuaded JJ - my sun - to look for other locations. Once, however, after checking out the dingy hotel, we discovered, that is more expensive, with tails tucked up, we returned to our first host. Surprisingly, he was very happy and lowered the price even further. He was a really lovely and warm old man. At the end we gave him Hungarian wine and he was delighted - as if someone was going to Sibenik, please write it, I will give the bearings. But let's go back to the city ...

It is a city, which the Croatians are extremely proud of. Do 1412 years was based on Venice, and in the following years it repelled numerous invasions by the Ottoman Empire. Protected by two fortresses, as the crazy Croatian driver assured us, about which more in a moment, this city never fell. Also during the last Balkan war. How to reconcile with that fact, that it was part of Venice, and then the Habsburg monarchy? I do not know. Maybe the fortress just never fell.

In any case, this town has everything anyone can dream about, who went on vacation. It is lovely, food is good and affordable (prices = half of the prices from Split). The old town is beautiful, white marble is walked everywhere. From almost every point in the city you can see two, castles on top. Of course, the first evening, we climbed the castle hill, we walked over the walls - not quite legally - and had extraordinary moments staring at the full moon, the bay, sleeping, Old Town, St.. James and the port full, yachts wobbling in the waves.

For those thirsty for sun and bathing, except pretty, a pebble beach located at the southern end of the town, the whole island is waiting. It is enough to take one of the numerous boats - a water taxi - and you will find yourself on an island with one long beach (largely concreted, unfortunately, but that's typical of Croatia). We, of course, went beyond the concrete sphere, which we paid for with our feet cut from stones, but definitely silence and sand, instead of the hustle and bustle and cement, were worth it.

Of course we didn't check, to which the ferry runs and, as a result, we were faced with the prospect of over 20 kilometers of walk. We tried to catch one of the private boats, but to no avail. Most weren't planning on leaving at all, and the others were full. End, in the end we were on our way. Moja wiara w moc autostopu nie zna granic, so despite the objections of the half no 2, we walked along the road.

However, we did not foresee, that it's a family vacation spot and everyone, literally every car, will be crammed to the limit. Some even stopped, they apologized and rode on. O 21:00 it also got completely dark. My girlfriend must have over 12 hours to be in Split and catch a flight to London, so it was getting a bit dull.

In the end though, when I heard about it, she asked me if the ferry was not running to 20:00 (deservedly, let's add) we caught the car. An old Opel stopped next to us. The glass slid down a centimeter and a half. A suspicious pair of eyes peeked out from inside.

– where are you from?

And we loaded ourselves in the back.

Only out of gratitude and no way out, I will add, we nodded our heads for the next twenty minutes listening to how Sibenik is a racially pure city, how our driver killed Serbs and how, in general, all Catholics and Slavs should stick together. My girl, originally from Hong Kong, fortunately, they did not understand our Polish-Croatian-German conversation very well. Our "host", in turn, he kindly did not extend his racial deliberations to Asia.

As polite and hospitable Slavs, he drove us almost to the house, He said goodbye and wished you luck. And, I started to wonder if I would survive being Orthodox. Albo Turkiem! Probably so. However, we would not have avoided the march.