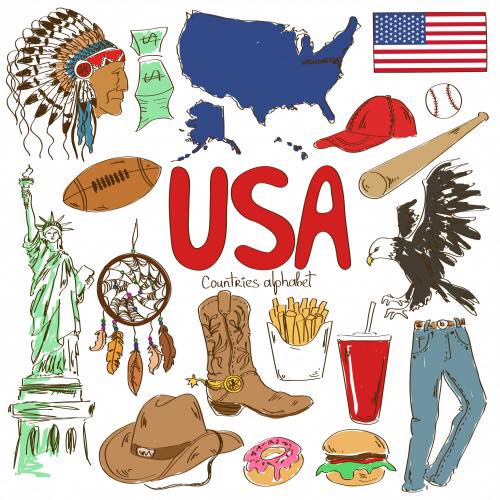 How to describe the customs of this enormous 52 states, counting 250 million inhabitants, since New York itself has its own way of life? Cosmopolitanism and provincialism, extreme puritanism, pioneering traditions, egalitarianzm – all this does not exclude attachment to the traditions and symbols of the past (like national Thanksgiving, commemorating the arrival of the first settlers from England, who a year 1621 they came here aboard the Mayflower).

Freedom. Perhaps the only rule in this country is that there are no rules and there is agreement on it, that it's always best to be natural. The Americans have lost their reserve and distance, which Europeans often hide behind. They try to share the joy of life with others. Direct, rectilinear, smiling, expansive, in return, they expect favor and courtesy. Naturalness is an advantage, because it allows you to be yourself and to express your cultural distinctiveness, national origin or the originality of customs. It is the same with the external appearance, with clothes – virtually anything is allowed, as long as it was conducive to well-being and freedom, although people associated with the world of finance, banking, and those who perform responsible functions come to offices in dark suits (gentlemen) or classic suits or costumes (ladies).

European, who set foot on American soil, dynamism and efficiency are striking at first – that ancestral heritage, who came here as pioneers. Women and men walk sure, with a brisk step from early morning to late evening. Seems, that the activity of these people does not stop for a moment.

At seven o'clock in the morning, you can watch the show in a New York hotel, what is breakfast, a time favorable for professional meetings, which therefore take place in an atmosphere of greater freedom. Then you can also see, how great the appetites are (in the broadest sense of the word) Americans.

Americans are cordial, and even cordials. Person, who will visit this country, will notice, how easy it is to switch to you, addressing each other by name and using diminutives. It doesn't take long to be invited home to a party or brunch. But the pace of life in big cities is dizzying, that their inhabitants barely have time to say good morning to each other, when by chance they meet in the street. Time is too precious, by go trwonić. In a way, cordial contacts do not mean intimacy.