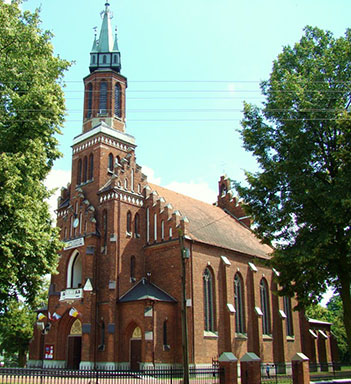 SMALL CHARLUPIA – sanctuary of Our Lady of Charłupska in the diocese of Włocławek. The village is located approx. 4 km to the north-west. from Sieradz.

The temple with the miraculous painting is a neo-Gothic building, hall, three-aisle, buttressed outside. It was established at the beginning of the 20th century. as the fourth in the place of the former churches. The crown at the top of the tower is a testimony, that it is the sanctuary of the Mother of God, commonly known here as the Duchess of Sieradz. In the tower above the main entrance to the church. Narodzenia NMP (at the height of. ok. 7 m), there is a chapel with an altar.

In the past, services for pilgrims were held here. On the outside of the presbytery, St. 1987 half an altar and a square for pilgrims. A particularly interesting element of the interior of the church is made in the years 1981-1988 by the artist from Krakow, a set of ten triptychs painted in oil on canvas and a large painting in the form of a triangle above the chapel, presenting events in the history of Poland, the history of the Sieradz region and the old Churches of Kharłup. The main altar – along with all the metalwork in the church - made according to the design of prof. Victor Zin. In the central part of the altar, with its structure referring to gothic triptychs, there is an object of worship – image of the Virgin Mary with the Child (in the type of Our Lady of the Snow), in dresses from the 17th and 18th centuries., probably from the 17th century.

The cult of the miraculous painting has been going on since the 17th century., expanded in 2. half. XVIII w. Many votive offerings were offered for the favors received. W 1831 issued for the purposes of the uprising 137 votive offerings of silver and gold. The painting was crowned 8 September 1937 by the bishop of Włocławek, Karol Radoński. The cult continues to the present day. This is evidenced by the votive offerings placed in 24 showcases, and 76 gilded plates with descriptions of favors experienced. It is customary to celebrate the altar with the miraculous image and to wander the copy of the painting through the houses of the parish. Extraordinary phenomena and events related to the miraculous image of Our Lady of Charłupska are registered in the "Book of Miracles".

The indulgence takes place on the feast of the Nativity of the Blessed Virgin Mary (8 September).

The pilgrimage season lasts from spring to late autumn. Marian and national holidays gather many people from outside the parish. During the year he visits the sanctuary 20-30 thousand. people. The main pilgrimage ceremony gathers numerous pilgrimages from the Sieradz region. State pilgrimages come to the sanctuary during the season – e.g.. eighth grade students, high school graduates, nuns. The Sanctuary of Our Lady of Charlotte is visited by pilgrims from all over the country - mainly from the south and north of Poland - going by coach to other centers of Marian cult.