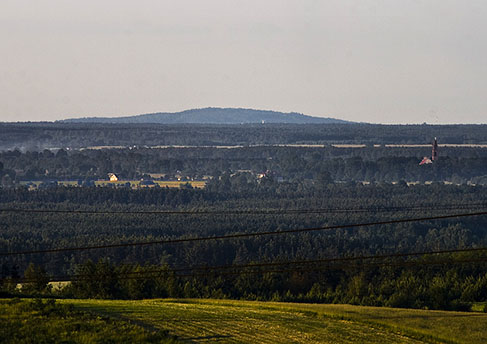 The hill on the Pilica river, also known as Mount Chełmo, it was surrounded by a stone wall, with a source or puddle at the feet, it resembles Ślęża and Łysa Góra. Długosz mentions Góra Chełmska as the most important mountain in the Sieradz region, arguing, that on the initiative of Piotr of Skrzynno, a church with 7 fosami. So far, their detailed research has not been carried out, considering them as the embankments and moat of an ordinary stronghold from the 10th century. This mountain is surrounded by many legends and folk tales. Malignant underground spirits live among the crevices and stones, Their existence is evidenced by the vapors rising over the boulders on warm days. The local witches are also supposed to come here for Sabbaths, as well as water demons (wired) from the Pilica river. Numerous legends tell about the army hidden inside the mountain, associated with the knighthood of St.. Jadwiga or Casimir the Great, waiting for a call. An oak is to grow on the top of Chełmska Góra, on whose cortex is information engraved, how long will the knights hold in wait. This inscription, as per application, can be read on the first Thursday after the new moon. Not far from the oak, there is a closed door to the underground in the ravine. Chełmska Góra is now known primarily as a stage of the annual pilgrimage from Warsaw to Częstochowa.