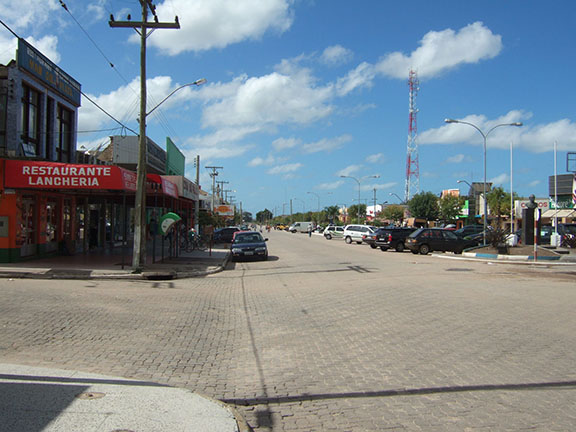 Uruguay is supposed to be, next to Chile, country in South America, w którym najłatwiej łapie się stopa. People are friendly, they are happy to stop, and besides, it's safe. It is all true, but because of the road structure and the distribution of towns in this country, hitchhiking isn't all that great. In fact, people stop, but they are able to drop you off only a few dozen kilometers - usually approx. thirty.

Po wyjeździe z Montevideo, it started well. The talkative Peruvian stopped first and drove us some seventy kilometers. Later, however, we found a series of farmers, and workers, who only moved between neighboring towns. It is a lot of fun to see a car stopping, while the need to leave it is less. We repeated this maneuver, until six o'clock, when the dusk caught us in total wasteland. We tried for half an hour more, but it didn't make sense. When it is dark it is not enough, that they see you too late, they are still afraid. As a result, we started marching. Optimistically, I suggested ringing the bells at the gates of the nearby haciendas, but the frightened owners only opened the curtains and looked at us anxiously. So much for safe Uruguay.

Finally, after a long walk, we found two girls, sitting by the side of the road - of course they scared us too, so we only had a conversation from a distance, - which directed us to a nearby town. There we repeated the maneuver asking for accommodation - to no avail, - we checked the offer of local hotels - expensive, - and we even checked the possibility of sleeping in one of the two churches - the ladies from the rosary circle told us, that the priest is gone. As a result, we were left sleeping at the bus station. We fastened the backpacks to the bench with buckles, and we lay down on the benches ourselves.

This time we took the last card from the pool and we got a clerk, who forbade us to sleep on the benches. More precisely, he said, that you mustn't lie on them. After unsuccessful attempts to sleep while sitting, I finally went to sleep, leaving only my feet on the ground. That was obviously enough for the guy, because he wasn't picking on anymore - my friend, by the way, used me as a curtain and lulled at best while lying down. And good.

Before going to bed, we arranged a ticket for the third in the morning to the border Chui, and Chuy - depends on the side of the border. We recognized, that we won't hitch at night anyway, or so we do know each other a little. We set the alarm clock, we woke up just in time for the bus and we fell on the seats, so we woke up at our destination - just like with a hammer to the head.

On the spot, taxi drivers dropped us off, offering transport to the border crossing itself, but we've habitually drove the boys away - paying for transport twice in a row is a hitchhiker. We asked the locals for directions and we went through the dark, empty city towards the border. One and a half kilometers. At the border gas station, we paid a mixture of Uruguayan and Brazilian money (the friend probably had one real from somewhere), we bought a lot of rolls and coffee. We moved on, we checked in a concrete shack controlled by soldiers and… wandering dogs, then we fell hungry and exhausted to the benches. The customs officers looked at us strangely, but they let us stuff ourselves with bread rolls and Argentinean luncheon meat. We took turns to go to the toilet, where, in an acrobatic way - although I can only speak for myself - we did ablution in the washbasin.

We sat a while longer, browsing passports and exchanging comments on the newly heard Portuguese language. The friend spoke with great optimism about the events ahead and he watched the Brazilian customs officer wandering around the room with delight.. "If there will be more, we won't be able to visit Paraguay!”. What can I say. We did not go to Paraguay.