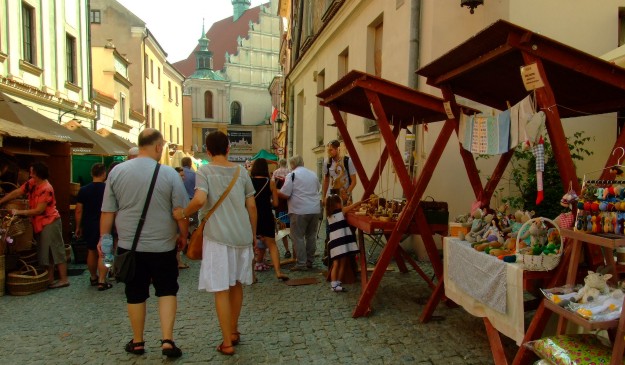 One can talk about Lublin endlessly, is a unique place to spend your free time here and then live …forever. Ancient monuments, attractions for everyone, unique gastronomy, affordable accommodation, china, theaters, philharmonic, entertainment centers.

Everyone who visits the city, will find out, that the time he spent here will not be wasted. A visit to the city will be remembered for a long time because what he sees here will be unique in the whole country. Some say that Warsaw, Gdańsk and Wrocław are more interesting, but those old cities turned to ash during the last war and what we see there is only a product of post-war builders. Lublin's Old Town has been practically untouched for hundreds of years and what we see here are true gems of history. The last war spared Lublin, with the exception of the great Jewish district which took place at the foot of the Castle Hill. Lublin was a multicultural city where Jews lived next to Catholics and the enterprising townspeople had their roots in Germany, Scotland, Armenia or Greece. Today, we can also observe such a multicultural mix among the inhabitants of Lublin, when foreigners studying in Lublin are frequent customers of numerous pubs in Lublin.. It's just a European city. We invite you.

THE UNKNOWN ORIGINS OF LUBLIN

Lublin's origins should be looked for far in the past, which is not mentioned in the oldest books. It was really a long time ago, when the area of ​​today's city was occupied by a dense forest with wild animals. A long time ago because at the end 3000 year before our era. On the border of today's Sławinek and Chekhov, the remains of an old settlement were discovered, and on Thursday Hill, a cemetery of the Globular Amphora culture. Before World War II, the remains of a mammoth and the teeth of an Arctic rhinoceros were discovered in the area of ​​the Old Town near the Dominican Church. W 1960 in Wiktoryn, in the extension of Lubartowska Street, the excavation at the depth was unearthed 2,5 meter huge mammoth secate. At the turn of the 19th and 20th centuries, traces of the Corded Ware culture from the years were discovered in the vicinity of today's railway station 2000 – 1800 before Christ. Similar discoveries were made in the Czechs and on Rury. The mound of the Trzciniec culture from the years comes from the Bronze Age 1400 – 1200 before Christ. On the other hand, finds in the vicinity of Kalinowszczyzna show that Lublin was inhabited in the years 1000 – 800 before Christ.

It is also worth adding, that in the vicinity of the Saski Garden, Roman coins were discovered on Narutowicza Street and the former Nowotki Street. The biggest surprise for archaeologists researching Lublin was the discovery in Sławina next to the Botanical Garden 4 cemeteries from different eras. There were three monumental tombs from before 5 thousand years.

According to archaeologists, the area of ​​today's Willowa Street has been a cult place for millennia. Even today, when a dark night falls over Sławinek with a gust of wind, the wailing ghosts of the people who lived here for several thousand years return. It is worth going there to pitch a tent next to the Botanical Garden and see what they have been talking about for centuries at night…

Lublin is a city where many famous people were born, who were later known not only in Poland but also around the world. Lublin is also a city with which many famous personalities have dealt. They lived here, they were creating for several years or more.

The most famous person who has been associated with Lublin for many years is Karol Wojtyla and the later pope Pope John Paul II. First as an associate professor, then the bishop, archbishop, cardinal – he headed the Department of Ethics at the Faculty of Philosophy of the Catholic University of Lublin. Cardinal Wojtyła started working at the Catholic University of Lublin in October 1954 a year of lectures commissioned on ethics. W 1956 year, he was already the head of the Department and the Chair of Ethics at the Faculty of Philosophy. He conducted classes in the form of lectures, exercises and seminars. He reconciled his research and teaching work with priestly work and he did not give it up despite many increasing duties. Karol Wojtyła had a group of faithful friends and students at the Catholic University of Lublin who called him Wójek during their joint travels.. He worked at the university until the conclave of St. 1978 year.

We invite you to Lublin. It is worth spending a few days here and maybe even more. Everyone will find something for themselves here. Great, century old monuments in their original state preserved until today and museums full of interesting exhibits. The Old Town and beautiful, atmospheric cafes where great music is played from the corner. Lots of different clubs where Lublin students spend their free time. A variety of attractions for everyone, regardless of age. Being in Lublin, everyone will find something for themselves and they will remember their stay with pleasure for a long time until the next return.

Lublin Old Town belongs to the group of the best preserved historic urban complexes in Poland. The first stronghold was built in the times of Bolesław the Brave on a hilly area which at that time had excellent defensive properties. In the chronicles, Lublin is mentioned for the first time in 1198 year and in 1317 year obtained city rights.

The central part of the Old Town in Lublin is the quadrilateral Market Square with the centrally located Town Hall which from 1578 year it became the seat of the Crown Tribunal and six streets leading out. Lublin's Old Town was once surrounded by walls, of which, unfortunately, only small fragments and two gates remained: Krakow Gate leading from the Lublin promenade to the Old Town and The Grodzka Gate leading from the Old Town along the embankment to the Castle Hill.

The largest temple in Lublin was the church parish church dedicated to Saint Michael. To this day, only the foundations remain of this beautiful and lofty building. Currently, the oldest temple in the Old Town is Dominican church from the 14th century, rebuilt in the Lublin Renaissance style after the great fire of Lublin in 1575 year. This fire in Lublin resulted in mass renovation and reconstruction of buildings in a new style.

The present Lublin Old Town is the result of the reconstruction in the first half of the 19th century. It was then that it was erected The Trinitarian Tower on the top of which there is a wonderful vantage point.