The most famous squares of London 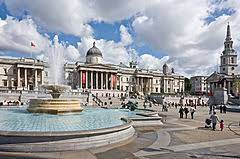 Even people can name the most famous squares in London, that have never been to London. Places like Trafalgar Square, Picadilly Circus, Leicester Square and Parliament Square are famous all over the world.

Trafalgar Square is located in the City of Westminster, at the corner of Pall Mall, Charing Cross Road, Strand, Whitehall i The Mall. The square was laid out in the place of the former royal stables, in the 1820s. W 1838 r. the magnificent edifice of the National Gallery was built in the northern part of the square, and a few years later, the 55-meter Nelson Column was erected in the center of the square. From the beginning, the square was called Trafalgar Square, with what he commemorated the famous, the English victory at the battle of Trafalgar, which took place in 1805 r. during the Napoleonic Wars. Outside Nelson's Column - depicting the author of the victorious Battle of Trafalgar, there are three more monuments in the square: gen. Henry’ego Haveloka, gen. Charles Napier and King George IV of Hanover. There is also one empty pedestal in Trafalgar Square, on which the equestrian statue was to be located, however, due to a lack of adequate funding, this plan was never implemented. At the end of the 20th century. in London there was a lively debate about the arrangement of the plinth. W 2003 r. London Mayor Ken Livingstone has decided, as expected by the public, that the pedestal will be a place for exhibiting various works of art. And yes, for example, w 2005 r. here stood a statue of "Alison Lapper" - a naked pregnant woman without arms, designed by Marc Quinn, a w 2009 r., through 100 days and nights (6 July - 14 October) the pedestal has become a living monument, on which it stood together 2400 people (each stood for one hour). We also need to know, that Trafalgar Square is the traditional venue for various demonstrations in London, here, too, a Christmas tree is set up and a New Year's Eve party takes place.

Piccadilly Circus is in the heart of the West End. It was laid out in 1819 r., and a characteristic feature of the square are huge light advertisements placed in its north-west corner, between Shaftesbury Avenue and Glasshouse Street. The most famous ads, displayed in the last 50 for years on Picadilly Circus they belonged to Coca-Cola, NO, McDonalds’a, Samsunga i Sanyo.

Another of the squares - Leicester Square, also located in the West End. It was laid out in the 17th century., and at the turn of the 18th and 19th centuries. was one of the largest entertainment centers in London. W 1854 r. the Alhambra Theater was erected next to the square - today the Empire, which houses the cinema. We must know, that Leicester Square is a real cinema center and apart from Empire there are three large cinemas - Odeon Leicester Square, Odeon Mezzanine and Odeon West End and several smaller screens - Odeon Panton Street, Entertainment view, Cineworld i Prince Charles Cinema. The biggest film productions premiered at Leicester Square, including Harry Potter and Shrek.

Parliament Square is situated next to the Palace of Westminster, in the City of Westminster district. It is extensive, green square, surrounded by monuments to eminent English and world politicians. There are statues of Winston Churchill here, Benjamin Disraeliego, Nelson Mandela, Henry Temple or George Canning. Parliament Square is the traditional venue for anti-government demonstrations.