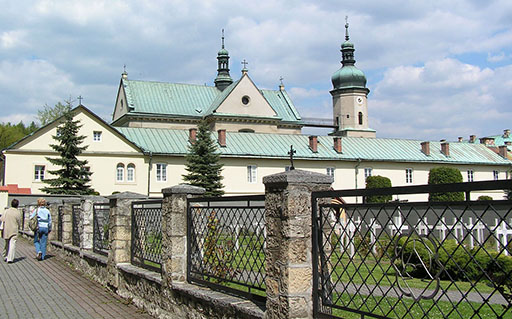 BLACK – Discalced Carmelite monastery with the church of. st. Elijah, located in the Archdiocese of Krakow, about 5 km north of Krzeszowice. Center of Marian and St.. Rafał Kalinowski.

The monastery complex located here is located on two adjacent hills: Chernivtsi and Siedlce, between which the Eliaszówka valley stretches. For over 170 years (from 1671) both hills were connected by a bridge called:

Devil's Bridge, Devil's Ridge or the Angelic Bridge. Only the extreme parts of it exist today.

In years 1657-1805 the whole area was the so-called. great enclosure. The monastery was then a hermitage, and the church was reserved only for hermits. Only in 1805, when the papal enclosure was abolished, the church was made available to the faithful, and the Carmelite fathers took care of the pastoral work.

In Czerna, the image of Our Lady of the Scapular, famous for its graces, is especially venerated. The current image, located in the left arm of the church's transept, it is a copy of the painting of Our Lady of the Snow that was located here earlier. It differs from its original with a scapular painted in the hand of Mary (caramel symbol) and a seven-pointed star on the right shoulder. The painting comes from the mid-17th century. and was probably made by Paweł Gołembiowski.

In the period, when the monastery was a hermitage, only the Carmelite Fathers themselves venerated the image. Only after the abolition of the enclosure, Czerna became a center of intense religious life and a place of Marian cult. Initially, the inhabitants of the neighboring villages made pilgrimages to Our Lady of Czernańska: Paczółtowice, Rudawy or Nowa Góra. Over time, the scope of the sanctuary's influence was gradually increasing. Currently, you can meet pilgrims from Chrzanów here, Olkusz, Krakow, Oświęcim, Bielsko-Biała, and even from Warsaw and Gdańsk. There have also been pilgrimages from abroad (from Italy, France, India, Ukraine, Canada). The evidence of the favors received are numerous votive offerings. The first written records of unusual healings, conversions and vocations come from the end of the 19th century. The next ones appeared throughout the 20th century until today.

On the occasion of the Millennium of the Baptism of Poland in 1966 the monastery gained the rank of a sanctuary and was included among the Marian shrines of Poland. The culmination of the cult of Our Lady of the Scapular was the coronation of the image under papal law, which 17 July 1988 was made by the Archbishop of Krakow, Card. Franciszek Macharski.

Monastery in Cz. it has the rank of a double sanctuary. In addition to the venerated image of Our Lady of the Scapular, the monastery is closely related to the figure of St.. Rafał Kalinowski – "Martyr of the national cause". W 1983 the chapel of St.. O. Raphael, in which, in addition to the image of the saint, there is also a coffin with his ashes. Beatification (1983), and later canonization (1991) Rafał Kalinowski undoubtedly influenced the development of the pilgrimage movement to Czerna. Currently, approx 30 thousand. people, of which the most accumulated is the main pilgrimage ceremony of Our Lady of the Scapular 16 July. Other celebrations include indulgences in St.. Joseph the Spouse (19 brand), st. Elijah (sunday after 20 July), st. Rafał Kalinowski (sunday after 20 November).